Roland Corporation was founded in 1972 and has since then manufactured some of the world’s best instruments. They not only make synthesizers but also drum machines and other equipment that has shaped electronic music in a way that no other company has been able to do.

Thanks to their commitment to excellence and their work ethic that results in durable and reliable equipment, Roland is known for producing high-quality gear. Their FA-07 is no exception.

This is an incredibly powerful workstation that is reimagined and streamlined in order for musicians using it to enjoy real-time power, fast workflow, and impressive versatility. While every model in the FA series features great effects and sound collections, the FA-07 has an incredibly sensitive keyboard and synth action. It has 76 keys that are durable and offer plenty of control when used, allowing musicians to enjoy zero load time and instant playback from the 16 pads.

When Roland developed the FA series of workstations, they wanted to create equipment that was easy to use and wouldn’t interrupt the creative process. By making the FA-07, Roland managed to create a workstation that is great for musicians who want to be able to capture their inspiration when working.

Who Is this Workstation Designed For?

This powerful workstation is designed for musicians who want to be able to perform on stage, practice at home, and not have to worry about having the power or speed necessary to capture their own musical ideas. The Roland FA-07 really shines when on stage, and because of the power that it offers, it makes it easy for musicians to switch and control their sound quickly, reducing any delay or breaks in songs.

Any keyboardist who wants to take his or her musical ability to the next level and has a budget large enough to support the Roland FA-07 will appreciate all of the features and benefits that this equipment has to offer. While it is a very advanced piece of musical equipment it is relatively easy to operate and has some features that make it a great choice for beginner musicians.

Like most workstations, the Roland FA-07 doesn’t come with any additional accessories. When you buy it you will get the workstation as well as all of the built-in features. This means that musicians need to have headphones on hand so they can listen to themselves, as well as a powerful monitor, computer, and any other musical equipment that they need.

Primary Features of the Roland FA-07

The Roland FA-07 is well-loved by all of its users because it has all of the power and volume of a full keyboard workstation without the bulk. It packs everything that you would want in a full music studio into a small format that is perfect for use on the go. Other great features include the following:

There are more than 2000 tones in the Roland FA-07. Borrowed from the flagship pro sound module, the INTEGRA-7, these tones produce an impressive palette of sounds. Not only does the Roland FA-07 include these tones, but also an expansive collection of acoustic tones. Users can switch between sounds seamlessly without having to worry about effect tails or notes being cut off.

Additionally, the Roland FA-07 has an intuitive 16-track sequencer. This has been designed to make it easy for musicians to capture inspiration as it hits, allowing for the completion of a full arrangement of sounds in just minutes. Thanks to the continuous recording that is possible when in loop mode, musicians can fill up 16 tracks without stopping.

Step recording is also possible on the Roland FA-07. This provides incredible control over editing and mixing tracks as you create them. When the tracks are edited and ready to be saved, they can be saved to an SDHC card as a stereo audio file.

Not only can you record and mix easily and quickly with the Roland FA-07, but this piece of equipment also allows users to polish sounds and tracks, resulting in perfect-sounding tracks that rival those created in a studio. This process is fast and easy and involves processing music with an isolator, DJ FX Looper, and more. Tweaking the effects via the sound modify knobs allows users to put their own personal touch on their sound.

Alternatives to the FA-07

The Yamaha MX61 is a powerful alternative to the Roland FA-07 and is a great choice for musicians who don’t have a budget large enough to accommodate the FA-07. It has 61 keys and a Motif Sound Engine that allows users to easily control up to eight elements in one voice for a unique tone. Thanks to the 16 channels of MIDI data and the ability to easily record and playback audio, musicians will be able to create great sounds with this equipment.

Another wonderful alternative is the Roland FA-08. It is very similar in design and power to the Roland FA-07 but offers a larger keyboard, which many musicians love. It still has an impressive light body and tons of power and control thanks to the arpeggiator, chord memory functions, independent FX engines, and sound module.

Conclusion – Is this Workstation the Right Choice for You? 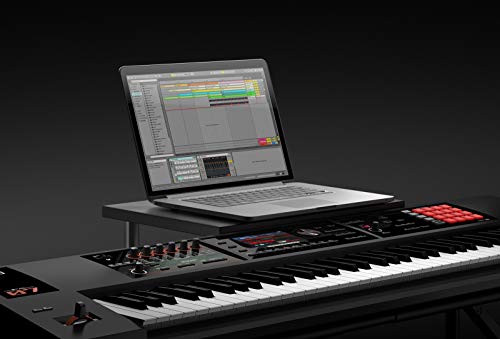 A great workstation can be an indispensable piece of equipment, and the Roland FA-07 is one such great option. It’s powerful, durable, and incredibly portable, which means that you can take it on the go without having to worry about missing out on inspiration or a gig.

This mid-priced workstation offers incredible power, which is one reason why it’s such a popular model. Any musician who wants to mix, edit, and adjust their sound and create backing loops will love this powerful piece of equipment. It’s perfect for any style of music, which is part of the reason why it is such a popular option. If you need a workstation that is as reliable as it is easy to use, the Roland FA-07 may be a great choice for you.