Even though Eventide was founded in a basement, it has quickly grown to become one of the most respected broadcast, communications, and audio companies in the US.

They create guitar effects, DSP software, and digital audio processors that are known for being high quality and reliable. At first glance, some of the equipment and products that they make may seem simple but are incredibly powerful and perfect for musicians of all skill levels who are looking to push and improve themselves.

What Is the Eventide Mixing Link?

The Eventide Mixing Link is, at its basis, a microphone preamp that contains switchable phantom power. It is built into a stompbox with a powerful footswitch effects loop that connects other processors and pedals. It can accept microphone, line-level, or instrument inputs, and even includes additional routing and I/O options to make it even more flexible.

Because the Eventide Mixing Link works just as well with other equipment and as a stand-alone mic preamp, it can be used in live settings or for practice and recording.

Who Is this Microphone Preamp Designed for?

The Eventide Mixing Link is designed to be used in the studio, on stage, and anywhere else that you are going to be playing music. This makes it one of the most versatile options on the market and easily explains why it appeals to so many different musicians. While it is powerful, it is fairly easy to use, which means that even beginning musicians can benefit from investing in the Eventide Mixing Link.

Because it can be used in so many ways, the possibilities of how the Eventide Mixing Link will improve your sound and performance are almost endless. It can be used as a DI box complete with a ground lift, an output switcher, a signal source selector, an interface for recording via a smartphone, a mic preamp, and even as a part of a live effects setup for a vocalist. Guitarists love using the Eventide Mixing Link as a headphone amp, which allows them to quickly switch chains of pedals off and on or to change a signal between destinations. 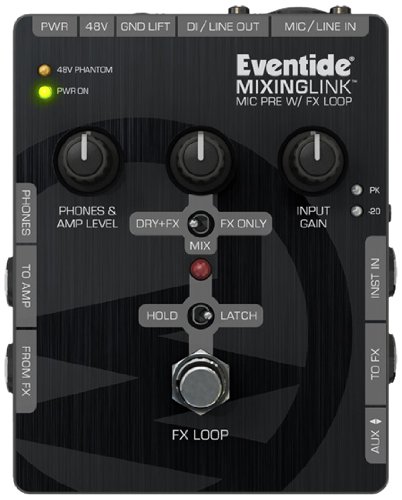 Other than the power supply, the Eventide Mixing Link ships by itself. This means that you need to have on hand any amps, instruments, microphone, headphones, or other cords that you’re going to use with this piece of equipment so that you can get the most use out of it right away.

Thanks to the instrument input, as well as the microphone input, musicians will be able to rely on this equipment to function as a DI and FX loop pedal. It works equally well as a mic preamp. Other great features include:

Solo musicians can rely on the Eventide Mixing Link to provide a single reverb effect on their guitar and on their vocals at the same time, while bass players are able to split their signal to the house PA at the same time that they drive an on-stage amp.

By setting the footswitch to momentary mode, musicians will be able to send their voice or their sound through the FX loop when holding down the switch, allowing for fast and momentary highlights that will make the music or certain vocals really stand out. This is much easier than turning chains of pedals off and on, such as you would have to do with a traditional setup.

Unlike some rackmount preamps that struggle with producing the right ratio of noise to signal, the Eventide Mixing Link offers pristine and incredibly clean gain. This means that musicians can rely on low-output mics and ribbon mics without worrying about their sound quality.

Finally, the Eventide Mixing Link has a -20dB pad that makes it easy to record louder sounds without worrying about them sounding distorted.

Alternatives to the Mixing Link

While many people love the Eventide Mixing Link, if it isn’t for you, then you will want to consider the Radial Voco Loco. This microphone effects loop and switcher offers dry/wet blend control, as well as two-band EQ. It has a foot-controlled effects loop along with a mic preamp, which is very similar to the Eventide Mixing Link. With a slightly lower price tag, it’s easy to see why it’s a good option for some musicians.

Another wonderful alternative to consider is the Radial 4-Play Instrument Direct Box. This powerful box has four-channel output, an output selector switch that is easy to use, and a mute switch. Not only that, but it is incredibly durable and rugged, which is what makes it a great choice for musicians who are hard on their gear and on the road for a lot of the time.

Conclusion – Is this Preamp Worth Considering? 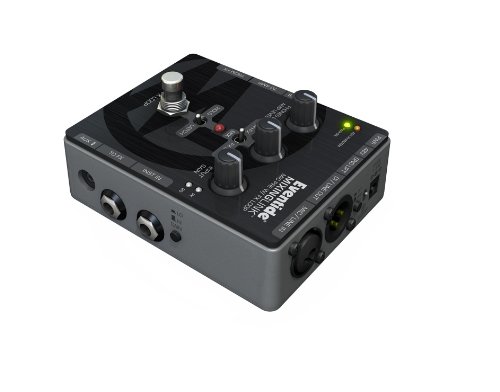 While it may be a little advanced and confusing for some beginners to use, with practice, most musicians can benefit from investing in the Eventide Mixing Link. It makes it easy to produce pure and clear sounds that are bright and true to your music. Because it is so versatile and can be used in so many ways, it is a great option for Sunday morning worship, as well as for playing in a garage band on Saturday. It’s durable, portable, and powerful, making it a great piece of equipment that is sure to surprise and impress you.